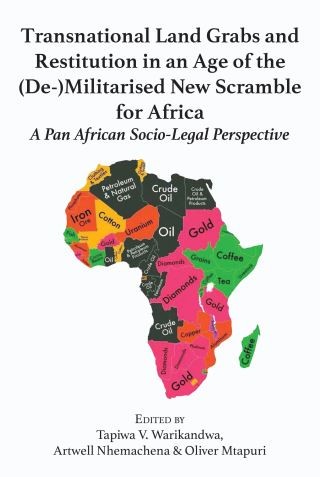 One of the fundamental challenges in deconstructing, rethinking and remaking the world from a Pan African vantage point is that some captives have tended to delight in the warmth of the [imperial] predator’s mouth. In other words, some captives forget that the imperial predator’s mouth gets warm because empire is eating and heating up from prey on the continent. (De-)Militarisation, Transnational Land Grabs and Restitution in an Age of the New Scramble for Africa: A Pan African Socio-Legal Perspective is a book that knocks on key aspects relating to land, militarisation, a PostAfrican World Order and a chaotic Post-God World Order, which require critical scholarly and policy attention in the quest to free Africa from centuries-old imperial depredations. The book carefully navigates the imperial entrapments which are designed to focus African attention only on decolonising African minds without also engaging in the [imperially more unsettling] decolonisation of African materialities.