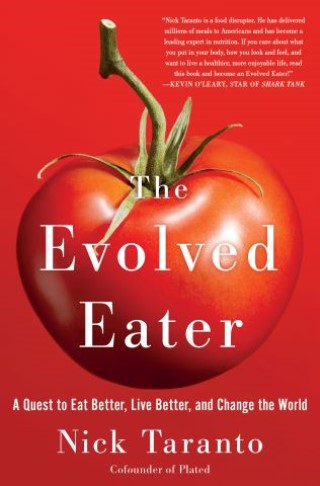 A Quest to Eat Better, Live Better, and Change the World

From the co-founder of Plated, the home delivery food service, an inspirational business title that is a call-to-arms and investigation into the industrial American food complex.

In early 2012, Nick Taranto was twenty-seven years old, recently married, and fresh out of the Marine Corps. He moved back to New York City, started working on Wall Street, and put on twenty pounds in under six months. He was pasty, overweight, and depressed – and he knew there had to be a better way to eat (and live).

The Evolved Eater chronicles his quest to change how we eat, and what this means for the future of food. As the co-founder of Plated, which has delivered tens of millions of meals across the country in its first five years, Taranto cares about the food we eat. As Evolved Eaters, we strive to continually improve and evolve as we grow through life. And eating – and being close to the food you cook and consume – is an inseparable part of this evolution.

Americans throw away over 300 billion pounds of food each year, while millions of children are food insecure or poorly nourished. How did the most food abundant nation in history get this vital issue so wrong?

Taranto provides eye-opening facts about how we acquire and eat food and easy and practical things that you can do to improve the way you eat (and live) starting today. Eating doesn’t need to be complicated or painful or over-thought. We’re starting The Evolved Eater revolution right here, right now.

Nick Taranto: NICK TARANTO was born in New York to a Turkish dad and a mom from Minnesota. After earning his MBA at Harvard Business School, Nick commissioned as an infantry officer in the US Marine Corps. Post active duty, Nick spent six months on Wall Street before leaving to found Plated, a technology-driven food company whose mission is to create a world where healthy, affordable, and delicious food is available to everyone. Plated has created over 1,000 jobs in four states, and has shipped tens of millions of meals across the United States. Nick is a husband and father of two young daughters. He is the author of The Evolved Eater.