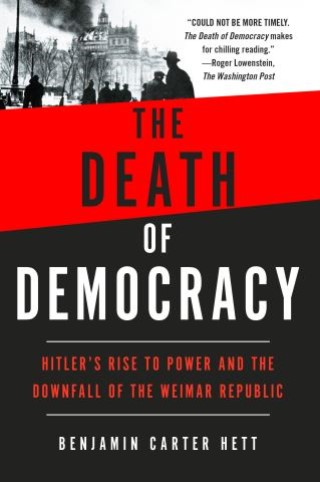 The Death of Democracy

Hitler's Rise to Power and the Downfall of the Weimar Republic

A riveting account of how the Nazi Party came to power and how the failures of the Weimar Republic and the shortsightedness of German politicians allowed it to happen.

Why did democracy fall apart so quickly and completely in Germany in the 1930s? How did a democratic government allow Adolf Hitler to seize power? In The Death of Democracy, Benjamin Carter Hett answers these questions, and the story he tells has disturbing resonances for our own time.

To say that Hitler was elected is too simple. He would never have come to power if Germany’s leading politicians had not responded to a spate of populist insurgencies by trying to co-opt him, a strategy that backed them into a corner from which the only way out was to bring the Nazis in. Hett lays bare the misguided confidence of conservative politicians who believed that Hitler and his followers would willingly support them, not recognizing that their efforts to use the Nazis actually played into Hitler’s hands. They had willingly given him the tools to turn Germany into a vicious dictatorship.

Benjamin Carter Hett is a leading scholar of twentieth-century Germany and a gifted storyteller whose portraits of these feckless politicians show how fragile democracy can be when those in power do not respect it. He offers a powerful lesson for today, when democracy once again finds itself embattled and the siren song of strongmen sounds ever louder.

Benjamin Carter Hett: Benjamin Carter Hett is the author of Burning the Reichstag, Crossing Hitler, and Death in the Tiergarten. He is a professor of history at Hunter College and the Graduate Center of the City University of New York, and holds a Ph.D. in history from Harvard University and a law degree from the University of Toronto. Born in Rochester, New York, he grew up in Edmonton, Alberta, and now lives in New York City.