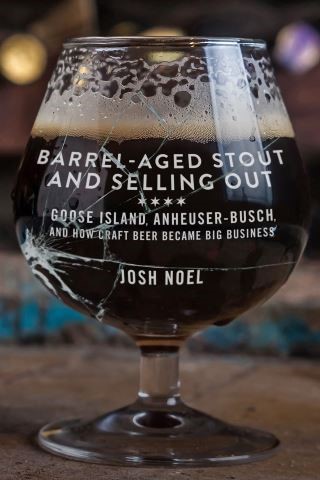 Barrel-Aged Stout and Selling Out

Goose Island opened as a family-owned Chicago brewpub in the late 1980s, and it soon became one of the most inventive breweries in the world. In the golden age of light, bland and cheap beers, John Hall and his son Greg brought European flavors to America. With distribution in two dozen states, two brewpubs and status as one of the 20 biggest breweries in the United States, Goose Island became an American success story and was a champion of craft beer. Then, on March 28, 2011, the Halls sold the brewery to Anheuser-Busch InBev, maker of Budweiser, the least craft-like beer imaginable. The sale forced the industry to reckon with craft beer's mainstream appeal and a popularity few envisioned. Josh Noel broke the news of the sale in the Chicago Tribune, and he covered the resulting backlash from Chicagoans and beer fanatics across the country as the discussion escalated into an intellectual craft beer war. Anheuser-Busch has since bought nine other craft breweries, and from among the outcry rises a question that Noel addresses through personal anecdotes from industry leaders: how should a brewery grow?

Josh Noel: Josh Noel writes about beer and travel for the Chicago Tribune; he has also contributed to This American Life and to the New York Times and other publications. He has become one of the nation's most recognizable beer journalists, winning multiple awards from the North American Guild of Beer Writers. He lives in Chicago with his wife and children.