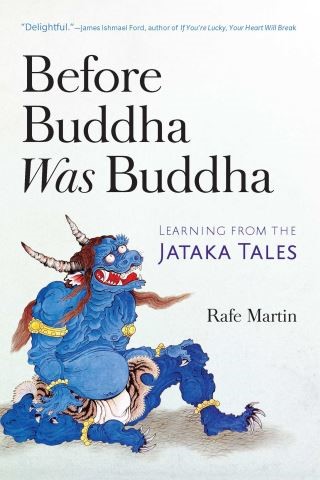 Before Buddha Was Buddha

Learning from the Jataka Tales

Discover how ordinary beings—a deer, a robber, a monkey, a parrot, and more—make up the past lives of the Buddha before he was Buddha.

The jataka tales are ancient Buddhist stories found in both the Pali Canon and Sanskrit tradition, recounting the many past lives and ongoing spiritual work of Shakyamuni Buddha on his way to his final birth as Siddhartha Gautama. In them we find the Buddha facing difficulties, making tough choices, doing hard work, falling down and getting back up—the kind of continuing effort of spiritual practice that all beings face.

Before Buddha was Buddha focuses on a selection of particular jataka tales in which the Buddha in past lives faces temptations and struggles with self-doubt as well as his own shortcomings. In these tales he’s not beyond life’s messes—its challenges and disasters—but is down in the mix, trudging through the mud with the rest of us. Each story, presented in brief, is followed by a commentary pointing to its relevance to our lives and practice-realization today.

Rafe Martin: Rafe Martin is a lay Zen teacher in the Harada-Yasutani koan line. He is founding teacher of Endless Path Zendo, Rochester, NY, and is also an award-winning author and storyteller whose work has been cited in Time, Newsweek, NY Times, and USA Today.

He is the recipient of the prestigious Empire State Award for the body of his work, as well as multiple American Library Association Notable Book Awards and Parent’s Choice Gold Awards. He has been featured at such storytelling events as the Joseph Campbell Festival of Myth and Story, The Sierra Storytelling Festival, and the National Storytelling Festival. He is the father of two grown children and lives with his wife, Rose, in Rochester, NY.