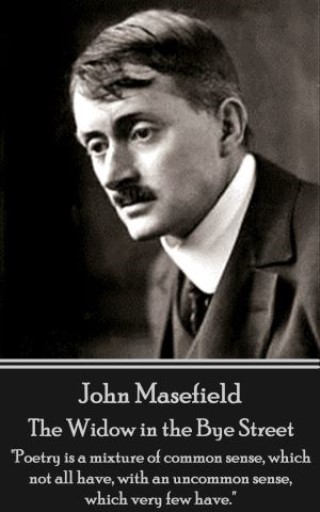 The Widow in the Bye Street

John Edward Masefield was born in 1878 in the sleepy market town of Ledbury in rural Hertfordshire. An idyllic childhood was ruined when he was left an orphan and sent to live with an Aunt who decided his education and life would be better spent at sea. At age 13 he boarded a school ship and there his love of writing and reading blossomed. By 1899 he began to publish and apart from brief service during World War I he now had a life of writing and lecture tours. He published much; novels, poetry and even an account of the disastrous war effort in the Dardanelles at Gallipoli. Upon the death of Robert Bridges in 1930, Masefield was given the prestigious position of Poet Laureate, a role he would fulfill until his death; the only poet to hold the position for a longer period was Alfred, Lord Tennyson. Despite later ill health and the death of his wife in 1960, Masefield continued to write. In 1966, he published his last book of poems, In Glad Thanksgiving, at the age of 88. In the latter part of 1966 gangrene was diagnosed in his ankle. This gradually spread through his leg and claimed his life on May 12, 1967. He was cremated and his ashes placed in the Poet’s Corner of Westminster Abbey. Here we present The Widow in the Bye Street.