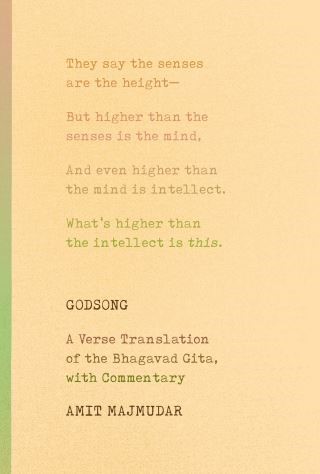 A Verse Translation of the Bhagavad-Gita, with Commentary

A fresh, strikingly immediate and elegant verse translation of the classic, with an introduction and helpful guides to each section, by the rising American poet.

Born in the United States into a secularized Hindu family, Amit Majmudar puzzled over the many religious traditions on offer, and found that the Bhagavad Gita had much to teach him with its "song of multiplicities." Chief among them is that "its own assertions aren't as important as the relationships between its characters . . . The Gita imagined a relationship in which the soul and God are equals"; it is, he believes, "the greatest poem of friendship . . . in any language." His verse translation captures the many tones and strategies Krishna uses with Arjuna--strict and berating, detached and philosophical, tender and personable. "Listening guides" to each section follow the main text, and expand in accessible terms on the text and what is happening between the lines. Godsong is an instant classic in the field, from a poet of skill, fine intellect, and--perhaps most important--devotion.

Amit Majmudar: AMIT MAJMUDAR is a diagnostic nuclear radiologist who lives in Westerville, Ohio, with his wife and three children. He is the author of three volumes of poetry, most recently Dothead. His first collection, 0°, 0°, was a finalist for the Poetry Society of America's Norma Farber First Book Award; his second, Heaven and Earth, was selected for the 2011 Donald Justice Prize. His work has appeared in The New York Times, The New Yorker, Best of the Best American Poetry, and many other places, including the eleventh edition of The Norton Introduction to Literature. He blogs for the Kenyon Review and is also a critically acclaimed novelist.