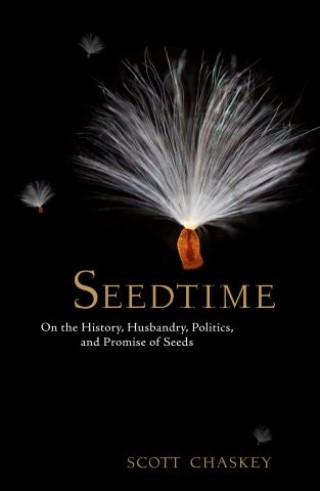 On the History, Husbandry, Politics and Promise of Seeds

Scott Chaskey—working farmer, poet, and spiritual father of the community farming movement—considers "the web of biodiversity and resilience at the heart of our cultural inheritance" by masterfully weaving history, politics, botany, literature, mythology, and memoir into a beautiful and instructive book.

It's hard to think of a subject more fundamental to the sustenance of the human race than seeds. Having coevolved with the Earth's plants, insects, and animals, seeds are entwined with the core myths of ancient cultures and the development of human consciousness. Their story remains vitally important today, as the corporations that manufacture GMOs threaten our food security and the future of seed-cultivated agriculture.

The stakes, for those concerned with preserving biodiversity and ecological integrity, are high. Balancing a wide view of politics and history, Chaskey alights from life on the farm he has cultivated for 25 years to conjure Gregor Mendel's breeding experiments that yielded our modern understanding of genetics; he also introduces us to several "bioneers," such as the geobotanist Nikolay Vavilov and agriculturalist Cary Fowler, who are preserving global biodiversity through seeds. Integrating scholarship with accessible storytelling, Seedtime is a celebration as well as a call to action urging us to renew our role as citizens of nature, in ecologist Aldo Leopold's phrase, not as conquerors of it.

Scott Chaskey: Scott Chaskey is a poet, farmer, and educator who for a quarter century has worked the land for the Peconic Land Trust at Quail Hill Farm in Amagansett, NY. A pioneer of the community farming movement, he is past president of the Northeast Organic Farming Association of New York and author of This Common Ground, a memoir. He lives in Sag Harbor, NY.