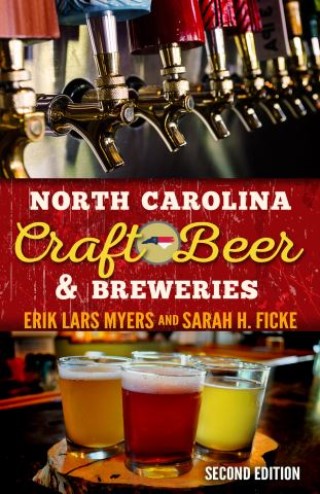 Boasting more craft breweries than any other state in the South, North Carolina is the state of Southern beer. In 2012, Erik Lars Myers wrote North Carolina Craft Beer & Breweries, which profiled 45 breweries. Since then, the number of breweries has more than tripled to over 140 and is still growing. Now, Myers and his wife, Sarah H. Ficke, have produced an expanded and updated second edition.

As in the first edition, Myers and Ficke relate the story of each brewery, profiling the brewers as well as the establishment’s history and the vision of its founders. They also provide details such as location, contact information, and hours of operation. What one reviewer called “an indispensable regional beer handbook” is back and better than ever, offering the ideal introduction for people learning about craft beer and a great resource for enthusiasts who want to get the most out of their craft beer experience.

Erik Lars Myers is the president of the North Carolina Craft Brewers Guild and the founder, CEO, and head brewer at Mystery Brewing Company in Hillsborough, NC. Sarah H. Ficke received her PhD in English from the University of North Carolina at Chapel Hill and is an assistant professor in the Department of Literature and Languages at Marymount University in Arlington, VA. In 2011, she put her academic research skills to work uncovering the history of brewing in the Tar Heel State for the first edition of North Carolina Craft Beer & Breweries. They live in Durham, NC.

"Myers is a tour guide we can trust"—Beer Advocate

"There may be no more devoted and jovial Pied Piper for beer than Erik Lars Myers, and North Carolina is lucky to have him. His barnstorming book is not only a touring essential for the state, but also a perfect reflection and manifestation of his attitude, vision, investment and energy for the craft."—All About Beer Magazine