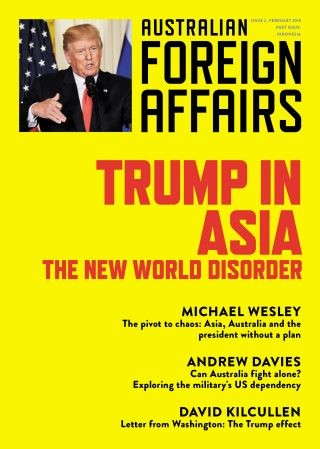 ‘We’ve hidden behind a hope that American power and resolve will again prevail. Trump tears away any excuse for wishful thinking.’ MICHAEL WESLEY

The second issue of Australian Foreign Affairs examines the United States’ sudden shift from the Asia Pivot to America First. It provides insights into Donald Trump’s White House and explores how his unpredictable approach to international affairs is affecting the volatile Asian region.

Trump in Asia is essential reading for anyone wanting to understand the issues facing Canberra as Australia’s closest ally recasts its alliances.

Australian Foreign Affairs is published three times a year and seeks to explore – and encourage – debate on Australia’s place in the world and global outlook.

Jonathan Pearlman: Jonathan Pearlman is the editor of Australian Foreign Affairs and is a correspondent for the Telegraph (UK) and the Straits Times newspaper (Singapore). He previously worked at the Sydney Morning Herald, covering foreign affairs and politics from Canberra and Sydney. He has worked as a correspondent in the Middle East, as well as covering various international stories, including the 2008 US election and the violence in eastern Congo. His work has appeared in numerous publications, including the Diplomat magazine, Good Weekend magazine, and the Australian Book Review, and he has been a Walkley Award finalist and United Nations Media Award winner. He was born in Sydney and studied at the University of New South Wales and Oxford University.