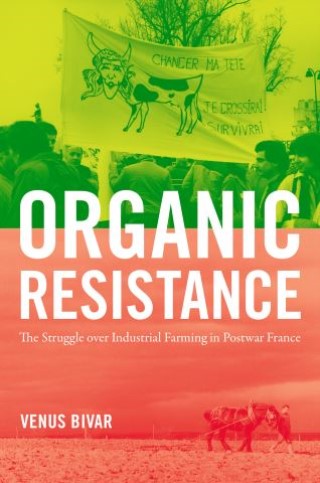 The Struggle over Industrial Farming in Postwar France

France is often held up as a bastion of gastronomic refinement and as a model of artisanal agriculture and husbandry. But French farming is not at all what it seems. Countering the standard stories of gastronomy, tourism, and leisure associated with the French countryside, Venus Bivar portrays French farmers as hard-nosed businessmen preoccupied with global trade and mass production. With a focus on both the rise of big agriculture and the organic movement, Bivar examines the tumult of postwar rural France, a place fiercely engaged with crucial national and global developments.

Delving into the intersecting narratives of economic modernization, the birth of organic farming, the development of a strong agricultural protest movement, and the rise of environmentalism, Bivar reveals a movement as preoccupied with maintaining the purity of the French race as of French food. What emerges is a story of how French farming conquered the world, bringing with it a set of ideas about place and purity with a darker origin story than we might have guessed.