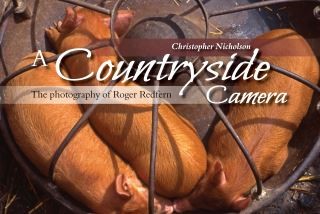 The Photographs of Roger Redfern

Roger Redfern – author, writer and photographer – had been writing about his travels and exploration of different areas of Britain and abroad for over 50 years, most notably as a regular contributor to The Guardian newspaper’s Country Diary feature. He is the author of over 30 books and was once described as ‘the doyen of countryside writers’, an accolade that recognised his lyrical and poetic writings about his travels. This book, the first in a short series, reveals the unknown side of Redfern, his photography, in stunning fashion. This first volume, to be followed by A Mountain Camera and An Island Camera, focuses upon his images of Britain’s countryside from his wanderings amongst the hills, valleys and villages of rural England, Wales and Scotland. He always had a camera with him to record his journeys; the countryside, the people and animals, and the weather – all captured on colour slides that date back to the 1950s. Many of his early images constitute valuable documents of social history – each one is meticulously captioned and dated to give an accurate record of its content and captures the changing nature of our countryside over the decades. Many would qualify as ‘art’ images because of the careful balance of colour, composition and atmosphere in these stunning colour photographs.. The author, a life-long friend of Roger Redfern, inherited the entire Redfern Collection of images and in the process of reviewing and sorting them has unearthed some absolutely magnificent photographs that deserve a wider audience. He has included quotations from Roger’s books and Country Diary articles, as well as snippets of personal information, to help the reader gain more of an insight into his life and character – a highly enjoyable mix of memorable images and colourful nostalgia from the past 50 years.