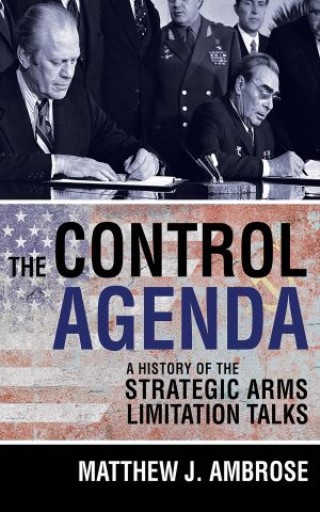 A History of the Strategic Arms Limitation Talks

The Control Agenda is a sweeping account of the history of the Strategic Arms Limitation Talks (SALT), their rise in the Nixon and Ford administrations, their downfall under President Carter, and their powerful legacies in the Reagan years and beyond.

Matthew Ambrose pays close attention to the interplay of diplomacy, domestic politics, and technology, and finds that the SALT process was a key point of reference for arguments regarding all forms of Cold War decision making. Ambrose argues elite U.S. decision makers used SALT to better manage their restive domestic populations and to exert greater control over the shape, structure, and direction of their nuclear arsenals.

Matthew J. Ambrose: Matthew Ambrose is Defense Analyst at the U.S. Government Accountability Office. He previously worked in the Office of the Secretary of Defense’s Historical Office. He lives with his family in Arlington, Virginia.