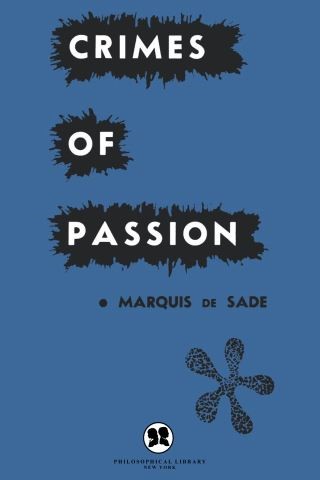 Originally published in 1800, Crimes of Passion contained eleven stories and an essay on the novel. The present book contains three abridged tales. In “Florville and Courval” we find not only a reinterpretation and elaboration of the Oedipus myth, but an unforgettable illustration of Donatien Alphonse François de Sade’s artistic creed. He was not simply an eccentric aristocrat with artistic pretensions, but a pathological rebel against the Age of Enlightenment, and a prisoner of the Prince of Darkness. The historical tale of “Juliette and Raunai” is sentimental and melodramatic. In it, virtue triumphs, but not before the lovers have run the gamut of human suffering. “Miss Henriette Stralson” has a contemporary setting and ranks above his historical tales. In it, virtue wins only a pyrrhic victory.

Marquis de Sade:
The Marquis De Sade was born in Paris, France in 1740. He fought in the French Army during the Seven Years War before he was tried and sentenced to death in 1772 for a series of sexual crimes. He escaped to Italy, but upon his return to France in 1777, he was recaptured and thrown into the prison at Vincennes. De Sade spent six years at Vincennes before being transferred to the Bastille, then to Charenton, a lunatic asylum, in 1789. He was released from the asylum a year later but was arrested again in 1801. He was moved from prison to prison before returning to Charenton in 1803, where he later died in 1814.

A French novelist and playwright, de Sade is largely known for his pathological sexual views and ethical nihilism. His works include Justine, Philosophy in the Bedroom, Juliette, and Aline and Valcourt or The Philosophic Novel.