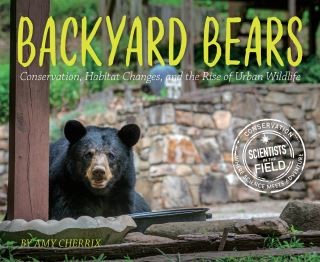 Conservation, Habitat Changes, and the Rise of Urban Wildlife

North Carolina's black bears were once a threatened species, but now their numbers are rising in and around Asheville. But what happens when conservation efforts for a species are so successful that there’s a boom in the population? Can humans and bears live compatibly? What are the long-term effects for the bears? Author Amy Cherrix follows the scientists who, in cooperation with local citizen scientists, are trying to answer to these questions and more. Part field science, part conservation science, Backyard Bears looks at black bears—and other animals around the globe—who are rapidly becoming our neighbors in urban and suburban areas.

Amy Cherrix:
Amy Cherrix holds a Master’s degree in children’s literature from Simmons College and works as a children’s book buyer at a fiercely independent bookstore. She is the author of Scientists in the Field title  Eye of the Storm: NASA, Drones, and the Race to Crack the Hurricane Code. Visit her at amycherrix.com.