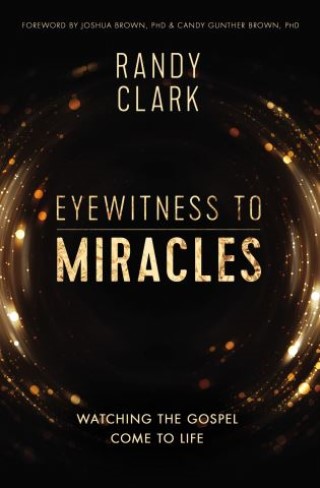 Watching the Gospel Come to Life

“This is such a wonderful book!”

Never before has a minister of the gospel gone to such great lengths to meticulously record so many miraculous events: The blind see, the lame walk, and the dead are raised.

Dr. Randy Clark shares the captivating results of a global healing ministry and provides links to video testimonies throughout the book.

He also addresses the skeptics.

Dr. Clark has gone to great lengths to follows up months later with each person to verify the healing. Eyewitness to Miracles is endorsed by university scholars and leaders from a variety of church backgrounds—Anglicans, Baptists, Catholics, and Methodists.

After all, if Jesus healed people in his day, why shouldn’t we expect to see people healed today?

Eyewitness to Miracles is a remarkable read that will make you believe once again.

Dr. Randy Clark is the founder and president of Global Awakening.  He pursued theological studies in college, eventually completing a Masters of Divinity from The Southern Baptist Theological Seminary in Louisville.  After years of ministry, Randy's life would drastically change in 1994 when he walked into a prayer meeting in a small storefront church near the Toronto Airport. That four-day meeting would turn into a worldwide revival, lasting over twelve years and impacting millions of people.  Since then Randy has traveled to over 50 countries spreading the good news of God's love.  He resides in Mechanicsburg, PA, with his wife, DeAnne.  They have four married adult children and four grandchildren.