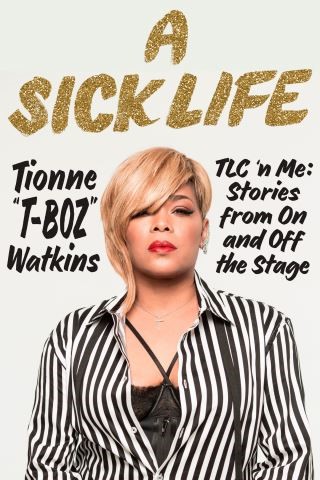 TLC 'n Me: Stories from On and Off the Stage

A candid memoir of fame, strength, family, and friendship from the lead singer of TLC

As the lead singer of Grammy-winning supergroup TLC, Tionne “T-Boz” Watkins has seen phenomenal fame, success, and critical acclaim. But backstage, she has lived a dual life. In addition to the balancing act of juggling an all-consuming music career and her family, Tionne has struggled her whole life with sickle-cell disease—a debilitating and incurable condition that can render her unable to perform, walk, or even breathe.

A Sick Life chronicles Tionne’s journey from a sickly young girl in Des Moines who was told she wouldn’t live to see 30 through her teen years in Atlanta to how she broke into the music scene and became the superstar musician and sickle-cell disease advocate she is today. Through Tionne’s tough, funny, tell-it-like-it-is voice, she shares how she found the inner strength, grit, and determination to live her dream, despite her often unpredictable and debilitating health issues. She dives deep into never-before-told TLC stories, including accounts of her friendship with Lisa “Left-Eye” Lopes and her tragic death. Tionne’s unvarnished discussion of her remarkable life, disease, unending strength, and ability to power through the odds offers a story like no other.

Tionne Watkins: Tionne “T-Boz” Watkins is the lead singer of the bestselling female group TLC, known for their singles, “Waterfalls,” “No Scrubs,” “Creep,” and “Unpretty,” which all charted #1 on Billboard. Tionne is a national spokesperson for sickle-cell disease. She lives in Los Angeles with her daughter, Chase, and son, Chance.