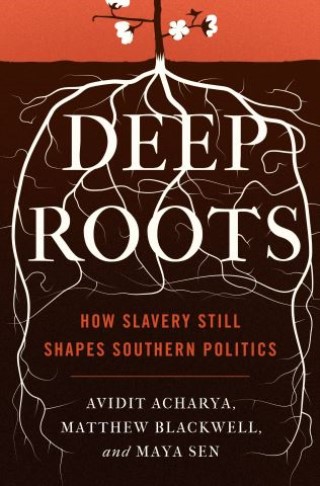 Despite dramatic social transformations in the United States during the last 150 years, the South has remained staunchly conservative. Southerners are more likely to support Republican candidates, gun rights, and the death penalty, and southern whites harbor higher levels of racial resentment than whites in other parts of the country. Why haven't these sentiments evolved or changed? Deep Roots shows that the entrenched political and racial views of contemporary white southerners are a direct consequence of the region's slaveholding history, which continues to shape economic, political, and social spheres. Today, southern whites who live in areas once reliant on slavery—compared to areas that were not—are more racially hostile and less amenable to policies that could promote black progress.

Highlighting the connection between historical institutions and contemporary political attitudes, the authors explore the period following the Civil War when elite whites in former bastions of slavery had political and economic incentives to encourage the development of anti-black laws and practices. Deep Roots shows that these forces created a local political culture steeped in racial prejudice, and that these viewpoints have been passed down over generations, from parents to children and via communities, through a process called behavioral path dependence. While legislation such as the Civil Rights Act and the Voting Rights Act made huge strides in increasing economic opportunity and reducing educational disparities, southern slavery has had a profound, lasting, and self-reinforcing influence on regional and national politics that can still be felt today.

A groundbreaking look at the ways institutions of the past continue to sway attitudes of the present, Deep Roots demonstrates how social beliefs persist long after the formal policies that created those beliefs have been eradicated.