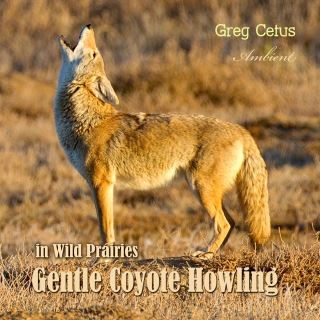 The coyote is smaller than its close relative, the gray wolf, and slightly smaller than the closely related eastern wolf and red wolf. The coyote holds title of being the most vocal of all wild North American mammals. Both strength and range of vocalizations is one of the most complex among such animals. The familiar coyote howl is also known as its greeting song which forms part of the final act of a complex greeting ceremony. It is the most iconic sound of the coyote. In this recording you will be able to experience this iconic greeting song. It is recorded from a distance so it won't be too overpowering. And there are gentle birdsongs and other animals forming part of this natural atmospheric and slightly spooky music.

Greg Cetus: Greg Cetus is an anthropologist passionate about music of the natural world. His audio records come from many carefully selected locations using high quality equipment designed to capture every tiny nuance of the magical ocean waves, enchanted forests and melodious birdsong soundscapes. This magic and its powerful holistic energy has been compiled into several natural world collections from Ocean Waves to Deep Forests. For more information about these recordings visit www.ocean-waves.co.uk