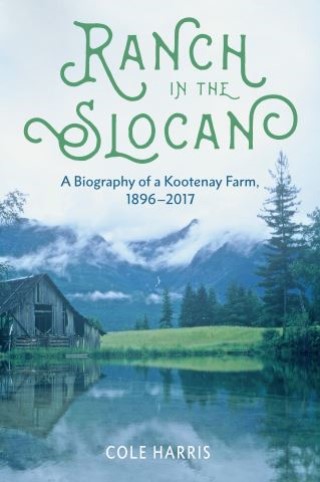 Ranch in the Slocan

In 1888, a prosperous industrial family in Calne, Wiltshire, sent one of its younger sons, a lad judged to have no head for business, to Guelph Agricultural College in Ontario to learn to be a farmer.

Joseph Colebrook Harris, the author’s grandfather, didn’t take to Ontario and after visiting a friend on Salt Spring Island, fell in love with BC. Eventually fetching up on the shores of the Slocan Lake, Joe bought 270 acres of hilly land in the Slocan Valley, less than thirty acres of which was really fit for farming, and began clearing the forest to build a ranch. Here is the story of Harris’s life and the next 120 years of the ranch’s, including the discovery of a silver–lead mine on the property, a period as a Japanese internment camp, brushes with American counterculture and the back-to-the-land movement, family conflicts, and an uncertain future.

In detail, Ranch in the Slocan is a very particular story, but its elements have repeated themselves across Canada. Settlers lived within bounded space, of which the Harris ranch is an extreme example, and adapted to cultural and social changes. Drawing from letters, diaries, family stories and recollections, photographs, as well as official records, Harris offers a case study in the history of homesteading, and a portrait of his family’s experiences in the Slocan Valley. The Harris ranch produced a little income now and then but was not, and never has been, a commercial success. Its yield was not so much measured by the market as by the more intangible pleasures of living within a diverse local economy in a remarkable place.