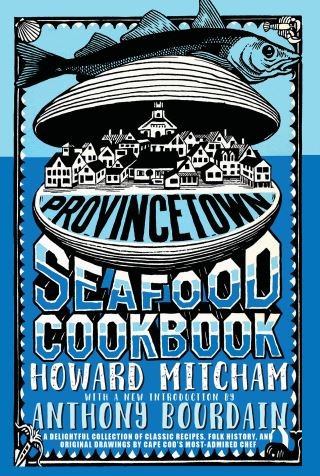 A delightful collection of classic recipes, folk history, and original drawings by Cape Cod's most-admired chef. With a new Introduction by Anthony Bourdain

"It's a true classic, one of the most influential of my life." --Anthony Bourdain, from the new introduction

"Provincetown ... is the seafood capital of the universe, the fishiest town in the world. Cities like Gloucester, Boston, New Bedford, and San Diego may have bigger fleets, but they just feed the canneries. Provincetown supplies fresh fish for the tables of gourmets everywhere." --Howard Mitcham

Provincetown's best-known and most-admired chef combines delectable recipes and delightful folklore to serve up a classic in seafood cookbooks.
Read about the famous (and infamous!) Provincetown fishing fleet, the adventures of the fish and shellfish that roam Cape Cod waters, and the people of Provincetown--like John J. Glaspie, Lord Protector of the Quahaugs.
Then treat yourself to Cape Cod Gumbo, Provincetown Paella, Portuguese Clam Chowder, Lobster Fra Diavolo, Zarzuela, and dozens of other Portuguese, Creole, and Cape Cod favorites. A list of fresh and frozen seafood substitutes for use anywhere in the country is a unique feature of this lively book.
You'll learn the right way to eat broiled crab and the safe way to open oysters. You'll even learn how to cook a sea serpent!

Howard Mitcham: Howard Mitcham was the legendary author, chef, artist and poet whose three major cookbooks, Provincetown Seafood Cookbook, Creole Gumbo and All That Jazz: A New Orleans Seafood Cookbook, and Clams, Mussels, Oysters, Scallops and Snails have influenced a generation of today's chefs. James Howard Mitcham was born in Winona, Mississippi and graduated from Greenville High School together with his friend the writer Shelby Foote. At the age of 16 Mitcham became deaf from spinal meningitis, but that didn't seem to stop him or even slow him down as he regaled friends with stories in his booming, Southern-accented voice. He earned a degree in art and architecture at Louisiana State University, then moved to New York's Greenwich Village, where he ran the Jane Street Gallery in the 1940s. Many of Mitcham's friends learned sign language to converse with him. For people who didn't know how to sign, Mitcham would carry notebooks and pens so they could write him notes. He co-authored a food column for the Provincetown Advocate with Jan Kelly, who called Mitcham "brilliant [and] never boring. Mitcham died on August 22nd, 1996, at the age of 79.


Anthony Bourdain is a writer, Emmy and Peabody Award-winning television personality, and former chef. Since 2002, he has hosted several culinary programs, including Anthony Bourdain: No Reservations, which ran for seven years on the Travel Channel, and his current series, Anthony Bourdain: Parts Unknown, on CNN. He is the best-selling author of the memoir Kitchen Confidential: Adventures in the Culinary Underbelly, as well as two cookbooks, three crime novels, a biography of Typhoid Mary, and several other works of nonfiction.