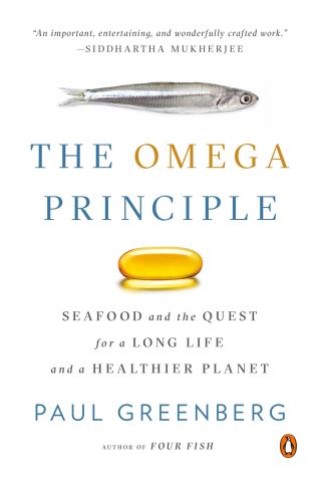 By the bestselling author of Four Fish and American Catch, an eye-opening investigation of the history, science, and business behind omega-3 fatty acids, the "miracle compound" whose story is intertwined with human health and the future of our planet

Omega-3 fatty acids have long been celebrated by doctors and dieticians as key to a healthy heart and a sharper brain. In the last few decades, that promise has been encapsulated in one of America's most popular dietary supplements. Omega-3s are today a multi-billion dollar business, and sales are still growing apace--even as recent medical studies caution that the promise of omega-3s may not be what it first appeared.

But a closer look at the omega-3 sensation reveals something much deeper and more troubling. The miracle pill is only the latest product of the reduction industry, a vast, global endeavor that over the last century has boiled down trillions of pounds of marine life into animal feed, fertilizer, margarine, and dietary supplements. The creatures that are the victims of that industry seem insignificant to the untrained eye, but turn out to be essential to the survival of whales, penguins, and fish of all kinds, including many that we love to eat.

Behind these tiny molecules is a big story: of the push-and-pull of science and business; of the fate of our oceans in a human-dominated age; of the explosion of land food at the expense of healthier and more sustainable seafood; of the human quest for health and long life at all costs. James Beard Award-winning author Paul Greenberg probes the rich and surprising history of omega-3s--from the dawn of complex life, when these compounds were first formed; to human prehistory, when the discovery of seafood may have produced major cognitive leaps for our species; and on to the modern era, when omega-3s may point the way to a bold new direction for our food system. With wit and boundless curiosity, Greenberg brings us along on his travels--from Peru to Antarctica, from the Canary Islands to the Amalfi Coast--to reveal firsthand the practice and repercussions of our unbalanced way of eating.

Rigorously reported and winningly told, The Omega Principle is a powerful argument for a more deliberate and forward-thinking relationship to the food we eat and the oceans that sustain us.

Paul Greenberg: Paul Greenberg is the author of the New York Times bestseller Four Fish: The Future of the Last Wild Food. Four Fish has been published throughout Europe and Asia and was picked by The New York Times, The New Yorker and Bon Appetit as a notable book of 2010. Greenberg has just completed his next work, American Catch: The Fight for Our Local Seafood (Penguin Press, June, 2014) a book that explores why the United States, the country that controls more ocean than any nation on earth imports 90 percent of its seafood from abroad. Mr. Greenberg writes regularly for the New York Times Magazine, Book Review and Opinion Page and also contributes to National Geographic, Vogue, GQ, The Times of London, Süddeutschen Zeitung, and many other publications. He has lectured widely at institutions around the country including Harvard, Yale, Google, The United States Supreme Court and The Monterey Bay Aquarium. Over the last ten years he has been a W.K. Kellogg Foundation Food and Society Policy Fellow, New York's South Street Seaport Museum's Writer-in-Residence and a fellow with the Blue Ocean Institute. He is the recipient of a James Beard Award for Writing and Literature, and a Grantham Prize Award of Special Merit. In 2014 he began a three year Pew Fellowship in Marine Conservation during which he will write "The Omega Principle: The health of our hearts, the strength of our minds, and the survival of our oceans all in one little pill."