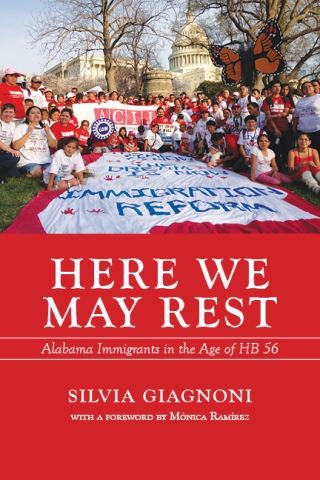 Here We May Rest

Alabama Immigrants in the Age of HB 56

Hailed as the most restrictive immigration bill in the nation, the Beason-Hammon Alabama Taxpayer & Citizen Protection Act (known as HB 56) went into effect in September 2011. Its intent was to create jobs for Alabamians by making the lives of undocumented immigrants in the state impossible, so that they would self-deport. It failed. Here We May Rest offers a comprehensive explanation of how and why HB 56 came about and reports on its effects on immigrant communities. Author Silvia Giagnoni argues that the legislation was anti-immigrant, not merely "anti-illegal immigration" as its proponents claimed. Building a case against the legalistic framework through which the bill was promoted, Giagnoni dissects the role the media, and Fox News specifically, played in criminalizing immigrants as well as mainstreaming immigrant-haters, which created the xenophobic climate that paved the way for the Trump Presidency. The new immigrants of Alabama take center stage in the second part of the book, reclaiming their role in the cultural, social, and economic development of the state. Giagnoni concludes with an appeal against any form of social segregation because only direct contact -- "massive, prolonged, equal and intimate," as Howard Zinn argued -- will cure the stereotyping and prejudice that feed ignorance and foster fear.