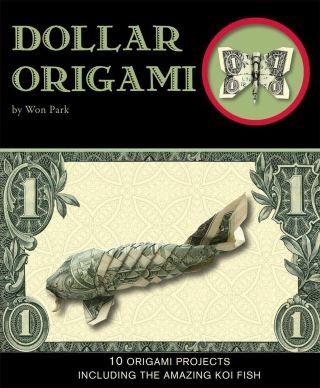 With Dollar Origami, you'll learn how to fold your dollars into frogs, scorpions, and other creatures and objects.

Dollar Origami teaches you how to turn your currency into almost anything with just a few folds. With the help of simple instructions and full-color photos, you'll be crafting beautiful butterflies, adorable penguins, and more in your own home in no time.

Won Park: Won Park was born in Korea and moved to the United States when he was three years old. Origami was an important part of his life from a very young age. Won started folding paper when he was 6 years old. His first mentor was his mother, who taught him very simple models. As he got older, he started to study origami from books he borrowed from the library. Won started to fold money when he was in middle school. He found the paper used to make the dollar was the ideal folding medium, since the paper is very resilient and strong. Since then he has specialized in folding money.