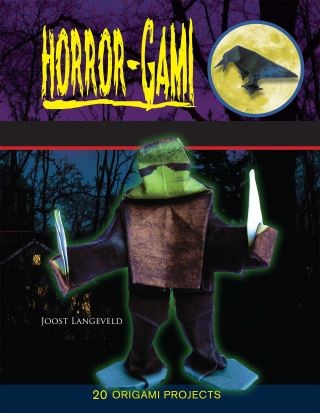 Paper has never been so horrifying!

Be bored nevermore, nevermore! A little piece of paper is hardly anything to be afraid of. But ordinary paper springs to life—and death!—with Horror-Gami, a new sophisticated origami kit for advanced origami artists. Create 20 origami projects: a vampire, Frankenstein, a black cat, a skull, a bat, a creepy hand, a mummy, a skeleton, a spider, a zombie, the Grim Reaper, an owl, a spooky tree with a raven on the branch, a werewolf, a raven, an axe, a ghost, a witch, and a headless horseman.

Horror-Gami offers a new look at the ancient art of origami and paper crafting.