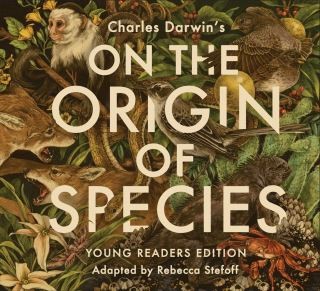 On the Origin of Species

Charles Darwin’s groundbreaking On the Origin of Species is now available in an accessible, illustrated edition for young readers that includes an introduction, glossary, modern insight and information, and more!

Charles Darwin’s famous theory of natural selection shook the world of science to its core, challenging centuries of orthodox beliefs about life itself. Darwin’s boundary-shattering treatise was captured in On the Origin of Species, originally published in 1859, a groundbreaking and detailed study on ecological interrelatedness, the complexity of animal and plant life, and the realities of evolution.

This Young Reader’s Edition makes Darwin’s cornerstone of modern science accessible to readers of all ages. Meticulously curated to honor Darwin’s original text, this compelling edition also provides contemporary insight, photographs, illustrations, and more. This adaptation is a must-have for any reader with a curious mind and the desire to explore one of the most influential books of our time.

Rebecca Stefoff: Rebecca Stefoff published her first books when she was in college and has been writing ever since. She has written many nonfiction books for children and young adults, with an emphasis on science and history. Through her books teenage readers can explore topics as varied as ghosts, robots, bacteria, evolution, women pioneers, the ruins of Great Zimbabwe, forensic crime solving, and more. She lives in Portland, Oregon.Charles Robert Darwin (1809–1882) was an English naturalist, biologist, and geologist, and is considered one of the most influential figures in human history. He is best known for his contributions to the science of evolution and his theory on natural selection, which he published in his 1859 book, On the Origin of Species.