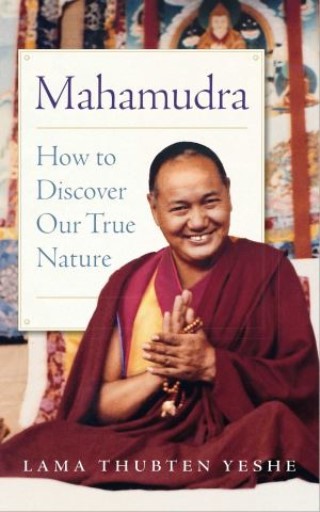 How to Discover Our True Nature

Relish these direct, experiential meditation instructions from the author of the bestselling Introduction to Tantra.

Lama Yeshe tells us that mahamudra is “the universal reality of emptiness, of nonduality” and its unique characteristic is its emphasis on meditation: “With mahamudra meditation there is no doctrine, no theology, no philosophy, no God, no Buddha. Mahamudra is only experience.”

He relies on the First Panchen Lama’s well-known Root Text of Genden Mahamudra, which in a few short pages provides the pith instructions for, first, overcoming distraction and resting in meditative stillness on the clarity of one’s own mind, and then by using a subtle wisdom, penetrating its ultimate nature, its emptiness.

As always, Lama Yeshe’s words are direct, funny, and incredibly encouraging. He gets us to go beyond ego’s addiction to a limited sense of self and to taste the lightness and expansiveness of our own true nature.

Lama Yeshe: Lama Thubten Yeshe (1935–84) was born in Tibet and educated at the great Sera Monastic University. He fled the Chinese occupation of his country in 1959. In the late 1960s, with his chief disciple Lama Thubten Zopa Rinpoche, he began teaching Buddhism to Westerners at Kopan Monastery, Kathmandu, Nepal. In 1975 they founded the international Buddhist organization the Foundation for the Preservation of the Mahayana Tradition (FPMT), which now has more than 160 centers, projects, and services worldwide.


Ordained since the late 1970s, Ven. Robina Courtin has worked full time since then for Lama Thubten Yeshe and Lama Zopa Rinpoche’s FPMT. Over the years she has served as editorial director of Wisdom Publications, editor of Mandala Magazine, executive director of Liberation Prison Project, and as a touring teacher of Buddhism. Her life and work have been featured in the documentary films Chasing Buddha and Key to Freedom.