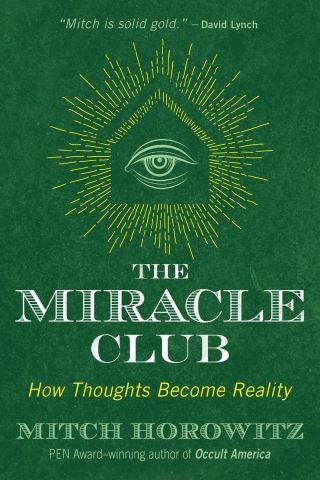 • Offers a concise, clear formula of focused exercises and concrete tools to lay out a specific path to manifest your deepest desires

Following in the footsteps of a little-known group of esoteric seekers from the late-nineteenth century who called themselves “the Miracle Club,” Mitch Horowitz shows that the spiritual “wish fulfillment” practices known as the Law of Attraction, Positive Thinking, “the Secret,” and the Science of Getting Rich actually work. Weaving these ideas together into a concise, clear formula, with real-life examples of success, he reveals how your thoughts can impact reality and make things happen.

In this “manual for miracles,” Horowitz explains how we each possess a creative agency to determine and reshape our lives. He shows how thinking in a directed, highly focused, and emotively charged manner expands our capacity to perceive and transform events and allows us to surpass ordinary boundaries of time and physical space. Building on Neville Goddard’s view that the human imagination is God the Creator and Ralph Waldo Emerson’s techniques for attaining personal power, he explores the highest uses of mind-power metaphysics and explains what works and what doesn’t, illuminating why and how events bend to our thoughts. He encourages readers to experiment and find themselves “at the helm of infinite possibilities.”

Laying out a specific path to manifest your deepest desires, from wealth and love to happiness and security, Horowitz provides focused exercises and concrete tools for change and looks at ways to get more out of prayer, affirmation, and visualization. He also provides the first serious reconsideration of New Thought philosophy since the death of William James in 1910. He includes crucial insights and effective methods from the movement’s leaders such as Ralph Waldo Emerson, Napoleon Hill, Neville Goddard, William James, Andrew Jackson Davis, Wallace D. Wattles, and many others. Defining a miracle as “circumstances or events that surpass all conventional or natural expectation,” the author invites you to join him in pursuing miracles and achieve power over your own life.

Mitch Horowitz: Mitch Horowitz is a PEN Award-winning historian, longtime publishing executive, and a leading New Thought commentator with bylines in The New York Times, Time, Politico, Salon, and The Wall Street Journal and media appearances on Dateline NBC, CBS Sunday Morning, All Things Considered, and Coast to Coast AM. He is the author of several books, including Occult America and One Simple Idea. He lives in New York City.