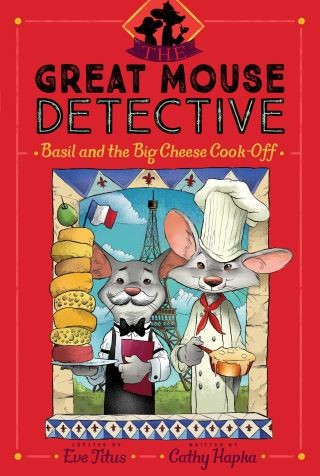 Basil and the Big Cheese Cook-Off

Named one of “13 Detective Book Series You Obsessed Over as a Kid” by Buzzfeed and the inspiration for a hit Disney film, the masterful Great Mouse Detective is back and scurrying off to Paris to discover who’s threatening the organizers of the Great Cheese Cook-off!

Basil the mouse detective is called to Paris when the organizers of the Great Cheese Cook-off (an international culinary competition) start receiving threats against the event. Who could want to deprive all of mousedom of one of its tastiest nights?

Basil immediately suspects Ratigan, who has escaped yet again and was seen lurking around Paris (and who, perhaps, holds a particular grudge against the event’s organizers). He sets off on his investigation at the event’s location, the Parisian College of Cooking (where local foodie mice hide out and take advantage of the school’s kitchens after the human students have departed each evening). But Basil is baffled when circumstantial evidence shows that it couldn’t have been his old enemy after all.

With one suspect crossed off the list, it’s up to Basil to find out what’s going on—before those anonymouse threats ruin the Cook-Off—for good!

Eve Titus: Eve Titus (1905–2002) wrote many books for children during her long career, including the Basil of Baker Street books and the Anatole series.Cathy Hapka has written more than 100 books for children and adults. She’s written for series as a ghostwriter and has also authored original titles. She lives in Pennsylvania.Dave Mottram is an illustrator living in Ohio who worked as a graphic designer for many years which led him to pursue his passion for illustration. He paints traditionally and digitally with color and layers and line. He loves tacos, animals, tikis, and nerding out over art supplies. Visit him at DaveMottram.com.