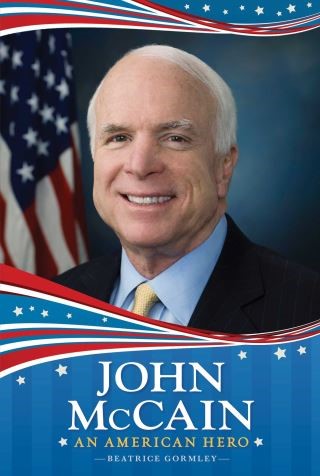 Learn all about the life of Senator John McCain in this enlightening biography specially written for a younger audience.

Five-term Arizona senator John S. McCain’s indelible mark on America was perhaps his destiny, as his grandfather proclaimed when he was just an infant, “This boy has the stamp of nobility on his brow.”

Following both his four-star US Navy father and grandfather into military service, McCain’s naval career imprinted the code of honor he has maintained to this day. Throughout the myriad life and death perils he faced—most notably being held captive as a Vietnam War prisoner of war for five and one half years in the Hoa Lo Prison or ‘Hanoi Hilton’—his courage, bravery, and tenacity has served him time and time again: as Navy liaison to the US Senate, as a member (and then chairman) on the Armed Services Committee, Commerce Committee, and Indian Affairs Committee, playing a key role in restoring diplomatic relations with Vietnam, championing finance reform by sponsoring the McCain-Feingold Act, and as the Republican nominee for president in 2008.

Beatrice Gormley: Beatrice Gormley has written a number of books for young readers, including several titles in the History’s All-Stars series, as well as biographies of Barack Obama, George W. Bush, Laura Bush, and John McCain. She lives in Westport, Massachusetts.