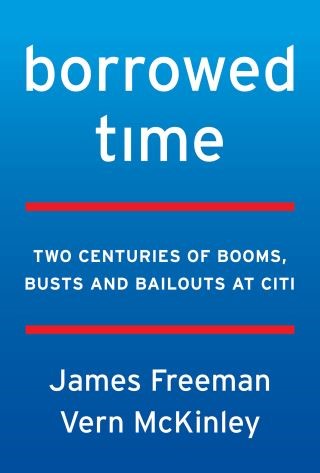 Two Centuries of Booms, Busts, and Bailouts at Citi

The disturbing, untold story of one of the largest financial institutions in the world, Citigroup—one of the " too big to fail" banks—from its founding in 1812 to its role in the 2008 financial crisis, and the many disasters in between.

During the 2008 financial crisis, Citi was presented as the victim of events beyond its control—the larger financial panic, unforeseen economic disruptions, and a perfect storm of credit expansion, private greed, and public incompetence. To save the economy and keep the bank afloat, the government provided huge infusions of cash through multiple bailouts that frustrated and angered the American public.

But, as financial experts James Freeman and Vern McKinley reveal, the 2008 crisis was just one of many disasters Citi has experienced since its founding more than two hundred years ago. In Borrowed Time, they reveal Citi’s history of instability and government support. It’s not a story that either Citi or Washington wants told.

From its founding in 1812 and through much of its history the bank has been tied to the federal government—a relationship that has benefited both. Many of its initial stockholders had owned stock in the Bank of the United States, and its first president, Samuel Osgood, had been a member of the Continental Congress and America’s first Postmaster General. From its earliest years, Citi took massive risks that led to crisis. But thanks to private investors, including John Jacob Astor, they survived throughout the nineteenth century.

In the twentieth century, Senator Carter Glass blamed Citi CEO "Sunshine Charlie" Mitchell for the 1929 stock market crash, and the bank was actually in violation of the senator’s signature achievement, the Glass-Steagall law, in the late 1990s until then U.S. Treasury Secretary Robert Rubin engineered the law’s repeal. Rubin later became the chairman of the executive committee of Citigroup, helping to oversee the bank as it ramped up its increasing mortgage risks before the 2008 crash.

The scale of the financial panic of 2008 was not, as the media and experts claim, unprecedented. As Borrowed Time shows, disasters have been relatively frequent during the century of government-protected banking—especially at Citi.