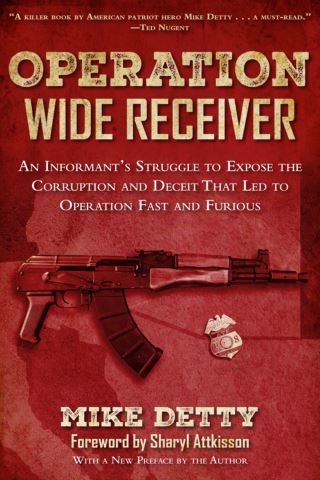 The shocking true story of the international sting operation that became a scandal—and a “must-read” eyewitness account of crime and betrayal (Ted Nugent).

In an attempt to stem the flow of firearms from the United States to Mexico, the Bureau of Alcohol, Tobacco, Firearms and Explosives (ATF) launched Project Gunrunner—a series of operations that would allow licensed gun dealers to sell weapons to illegal gun buyers. They hoped they would be able to track the weapons to the murderous drug traffickers and higher-ups in the Mexican cartels.

Moved by his own sense of duty, Tucson gun dealer Mike Detty informed local ATF officers when he was approached by suspected cartel members looking for arms. With the help of the ATF, Detty soon found himself a key component in a major investigation—Operation Wide Receiver—selling guns to the cartel buyers while keeping the authorities informed. The entire time, he knew his life was on the line. But nothing could have prepared him for a betrayal by the very people he was trying to help.

Here, Mike Detty tells a gripping story of international crime, deception, and patriotic courage in the midst of a scandal that would shock the nation.