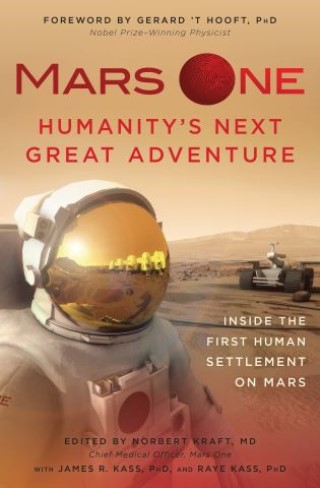 Humanity's Next Great Adventure: Inside the First Human Settlement on Mars

Will we one day walk on Mars? A book that “will feed the imagination of anyone with an interest in space or the future of humanity on other worlds” (Foreword Reviews).

In 2011, Mars One announced its intentions to establish a permanent human settlement on Mars beginning as early as 2024. Two years later, it launched its astronaut-selection program and received thousands of applications.

Now you can step inside the experience of these astronaut pioneers and explore the various human dimensions of Mars One’s planned expeditions. Edited by Mars One’s chief medical officer and head of crew selection and training, as well as crew selection and training committee members, this collection of essays from scientists, psychologists, and more provides a behind-the-scenes look at the process and criteria used to choose candidates, and predictions about their future lives on Mars. With a foreword by a Nobel Prize–winning physicist, Mars One also includes in-depth discussions of:

This book also includes excerpts from candidate questionnaires, allowing readers to enter the minds of prospective Martians like never before.