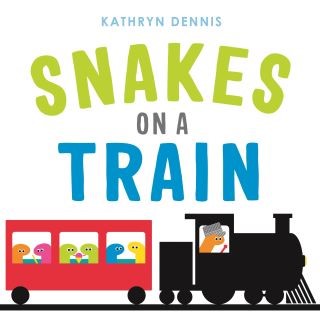 Snakes on a Train

An adorable picture book full of sibilant sounds and other word play, Snakes on a Train is as fun for parents as it is for kids, and sure to be a read-aloud hit.

The conductor takes the tickets
as the snakes start crawling on.
The tracks are checked,
the whistle blows. It's time to move along.
Hissssssssssss goes the sound of the train.

Kathryn Dennis: Kathryn Dennis began her art career drawing on walls and sidewalks and painting anything that did not move. In fourth grade, she published her first project—a comic strip about a platypus, which she sold for a nickel. Snakes on a Train is her (official) picture book debut. She also works at Magnolia's Bookstore in Seattle, Washington, where she lives.