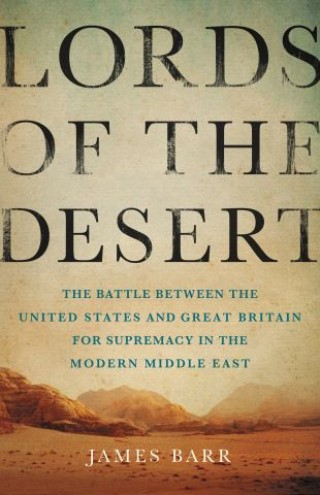 Lords of the Desert

A path-breaking history of how the United States superseded Great Britain as the preeminent power in the Middle East, with urgent lessons for the present day
We usually assume that Arab nationalism brought about the end of the British Empire in the Middle East--that Gamal Abdel Nasser and other Arab leaders led popular uprisings against colonial rule that forced the overstretched British from the region.
In Lords of the Desert, historian James Barr draws on newly declassified archives to argue instead that the US was the driving force behind the British exit. Though the two nations were allies, they found themselves at odds over just about every question, from who owned Saudi Arabia's oil to who should control the Suez Canal. Encouraging and exploiting widespread opposition to the British, the US intrigued its way to power--ultimately becoming as resented as the British had been. As Barr shows, it is impossible to understand the region today without first grappling with this little-known prehistory.