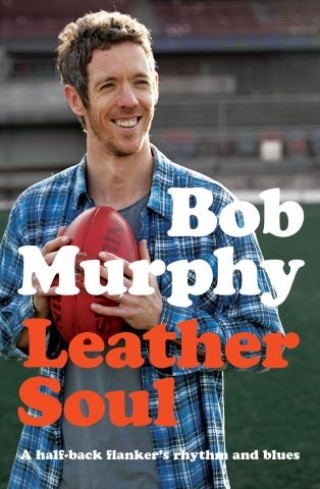 A Half-back Flanker's Rhythm and Blues

Bob Murphy has never been your average footballer. Music buff, Age columnist and Winnebago driver, he is as comfortable in the corner of a café or grungy pub as he is in the locker room.

Murphy takes us inside his 17-year career, including three years as Bulldogs captain, exploring the people and places that shaped him: from kicking a tattered football around as a kid in Warragul to coaching the Community Cup with Paul Kelly, and to two season-ending ACL ruptures.

How did the country kid with a gypsy’s heart become an All-Australian captain? What’s it like to have to watch from the sidelines as your club wins the grand final for the first time in 62 years? How does it feel to realise you can no longer do the things that made you great?

The celebrated Australian football bard Martin Flanagan has long insisted Bob Murphy has a book in him like no footballer has written. Leather Soul proves him right.

‘We are indebted to him for making us believe in the game again.’ —Gerard Whateley

‘Leather Soul paints a poignant picture of a man struggling to overcome the enormity of missing out on the game of his life.’––Kate O’Halloran, The Guardian

‘Bob Murphy’s got a great story to tell, and he does it pretty damn well. He was an exceptional footballer. Lucky lad, he’s an exceptional writer too. Leather Soul is … superb.’ —Paul Amy, Leader Newspaper and Inside Football

‘There is only one Bob Murphy.’ —Martin Flanagan