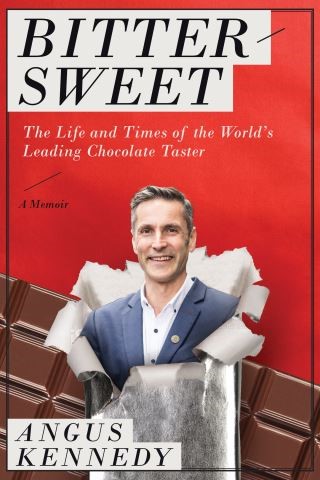 The Life and Times of the World’s Leading Chocolate Taster

The world’s leading chocolate taster shares his wild ride to attain the most envied job, and explains his warning heard around the world: that we might soon run out of chocolate.

Angus Kennedy has the best job of all time. But his journey to becoming the world’s leading chocolate taster has followed a rocky road. Kennedy spent his childhood learning his way around the chocolate industry despite an alcoholic mother, a father dying of cancer, and multiple brushes with death. Now in Bittersweet, he reveals how he became the king of cocoa and also gives a fascinating tour of the industry, answering questions such as: are we really going to run out of chocolate; is chocolate good for you; what are the most surprising kinds of chocolate; can chocolate be low calorie; and should we be eating organic or fair trade chocolate. He also includes an enlightening guide to knowing if you’re eating high-quality chocolate.

Doused in Kennedy’s signature British humor, sprinkled with tear-jerking moments, and baked to engaging, can’t-put-down perfection, this humorous and memorable memoir is a tale of dysfunction, but also redemption. The account begins during Kennedy’s childhood, when his mother managed the family magazine, a chocolate review, and candy samples were his meals, essential for his survival. Later, under his leadership, the family magazine became the world’s leading chocolate review publication. Kennedy also opened the industry’s main trade show: the World Chocolate Forum. Today, mouthwatering chocolates of all flavors and shapes arrive daily! But with this sweet life, there was also a sobering realization: that the cocoa bean is in grave danger. When Kennedy first publicly shared this, hysterics ensued. Here he tells the full story. This book reveals the secrets of the chocolate world and its king, the bitter and the sweet.