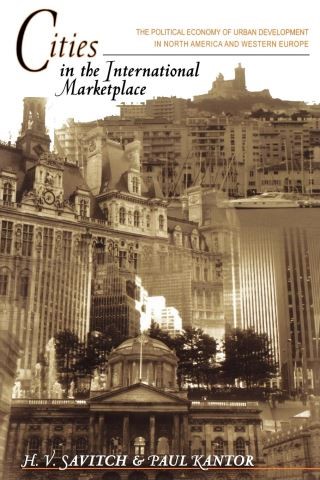 Cities in the International Marketplace

Does globalization menace our cities? Are cities able to exercise democratic rule and strategic choice when international competition increasingly limits the importance of place? Cities in the International Marketplace looks at the political responses of ten cities in North America and Western Europe as they grappled with the forces of global restructuring during the past thirty years. H. V. Savitch and Paul Kantor conclude that cities do have choices in city building and that they behave strategically in the international marketplace.

Rather than treating cities through case studies, this book undertakes rigorous systematic comparison. In doing so it provides an innovative theory that explains how city governments bargain in the capital investment process to assert their influence. The authors examine the role of economic conditions and intergovernmental politics as well as local democratic institutions and cultural values. They also show why cities vary in their approaches to urban development. They portray how cities are constrained by the dynamics of the global economy but are not its prisoners. Further, they explain why some urban communities have more maneuverability than do others in the economic development game. Local governance, culture, and planning can combine with economic fortune and national urban policies to provide resources that expand or contract the scope for choice. This clearly written book analyzes the political economy of development in Detroit, Houston, and New York in the United States; Toronto in Canada; Paris and Marseilles in France; Milan and Naples in Italy; and Glasgow and Liverpool in Great Britain.