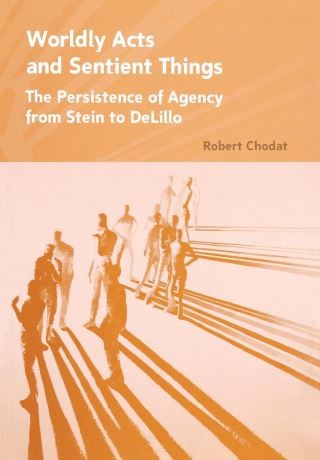 The Persistence of Agency from Stein to DeLillo

Ants, ghosts, cultures, thunderstorms, stock markets, robots, computers: this is just a partial list of the sentient things that have filled American literature over the last century. From modernism forward, writers have given life and voice to both the human and the nonhuman, and in the process addressed the motives, behaviors, and historical pressures that define lives—or things—both everyday and extraordinary.

In Worldly Acts and Sentient Things Robert Chodat exposes a major shortcoming in recent accounts of twentieth-century discourse. What is often seen as the "death" of agency is better described as the displacement of agency onto new and varied entities. Writers as diverse as Gertrude Stein, Saul Bellow, Ralph Ellison, and Don DeLillo are preoccupied with a cluster of related questions. Which entities are capable of believing something, saying something, desiring, hoping, hating, or doing? Which things, in turn, do we treat as worthy of our care, respect, and worship?

Drawing on a philosophical tradition exemplified by Ludwig Wittgenstein and Wilfrid Sellars, Chodat shows that the death of the Cartesian ego need not entail the elimination of purposeful action altogether. Agents do not dissolve or die away in modern thought and literature; they proliferate—some in human forms, some not. Chodat distinguishes two ideas of agency in particular. One locates purposes in embodied beings, "persons," the other in disembodied entities, "presences." Worldly Acts and Sentient Things is a an engaging blend of philosophy and literary theory for anyone interested in modern and contemporary literature, narrative studies, psychology, ethics, and cognitive science.