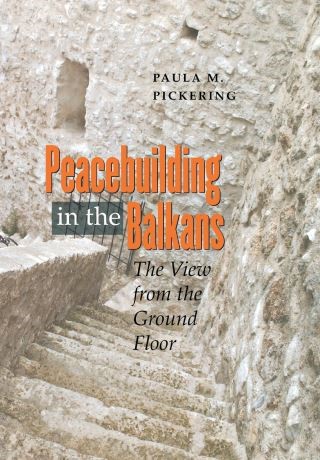 Peacebuilding in the Balkans

The View from the Ground Floor

After suffering years of war, Bosnia is now the target of international efforts to reconstruct and democratize a culturally divided society. The global community's strategy has focused on reforming political institutions, influencing the behavior of elite populations, and cultivating nongovernmental organizations. But expensive efforts to promote a stable peace and a multiethnic democracy can be successful only if they resonate among ordinary people. Otherwise, such projects will produce fragile institutions and alienated citizens who will be susceptible to extremists eager to send them back into war. Paula M. Pickering challenges the conventional wisdom that common people are merely passive recipients of peacebuilding projects. Instead, in Peacebuilding in the Balkans, she shows how ordinary people, particularly minorities in Bosnia, understand elite rhetoric and actively shape reconstruction.

Pickering's years of fieldwork—direct observation, interviews, and analysis of many surveys—has yielded a precise understanding of how ordinary citizens react to and influence peacebuilding programs in their neighborhoods, workplaces, municipal agencies, and other real-life social settings. The evidence suggests that international efforts to rebuild an inclusive Bosnia will be futile unless they pay sufficient attention to citizens' varying ties to ethnic groups, indigenous forms of civic activity, and the development of nondiscriminatory employment and responsive political institutions. Pickering's insights from reconstruction in the Balkans have important implications for peacebuilding elsewhere in Eurasia.