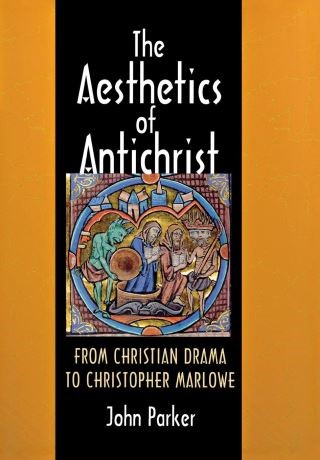 The Aesthetics of Antichrist

From Christian Drama to Christopher Marlowe

In Dr. Faustus, Christopher Marlowe wrote a profoundly religious drama despite the theater's newfound secularism and his own reputation for anti-Christian irreverence. The Aesthetics of Antichrist explores this apparent paradox by suggesting that, long before Marlowe, Christian drama and ritual performance had reveled in staging the collapse of Christianity into its historical opponents—paganism, Judaism, worldliness, heresy. By embracing this tradition, Marlowe's work would at once demonstrate the theatricality inhering in Christian worship and, unexpectedly, resacralize the commercial theater.

The Antichrist myth in particular tells of an impostor turned prophet: performing Christ's life, he reduces the godhead to a special effect yet in so doing foretells the real second coming. Medieval audiences, as well as Marlowe's, could evidently enjoy the constant confusion between true Christianity and its empty look-alikes for that very reason: mimetic degradation anticipated some final, as yet deferred revelation. Mere theater was a necessary prelude to redemption. The versions of the myth we find in Marlowe and earlier drama actually approximate, John Parker argues, a premodern theory of the redemptive effect of dramatic representation itself.

Crossing the divide between medieval and Renaissance theater while drawing heavily on New Testament scholarship, Patristics, and research into the apocrypha, The Aesthetics of Antichrist proposes a wholesale rereading of pre-Shakespearean drama.