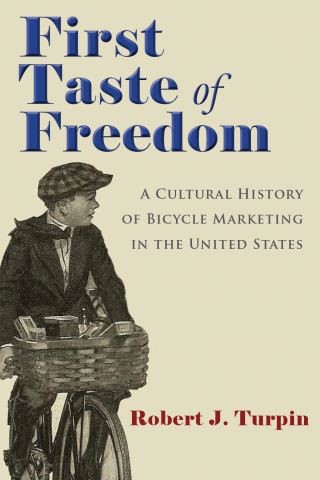 A Cultural History of Bicycle Marketing in the United States

The bicycle has long been a part of American culture but few would describe it as an essential element of American identity in the same way that it is fundamental to European and Asian cultures. Instead, American culture has had a more turbulent relationship with the bicycle. First introduced in the United States in the 1830s, the bicycle reached its height of popularity in the 1890s as it evolved to become a popular form of locomotion for adults. Two decades later, ridership in the United States collapsed. As automobile consumption grew, bicycles were seen as backward and unbecoming—particularly for the white middle class.
Turpin chronicles the story of how the bicycle’s image changed dramatically, shedding light on how American consumer patterns are shaped over time. Turpin identifies the creation and development of childhood consumerism as a key factor in the bicycle’s evolution. In an attempt to resurrect dwindling sales, sports marketers reimagined the bicycle as a child’s toy. By the 1950s, it had been firmly established as a symbol of boyhood adolescence, further accelerating the declining number of adult consumers.
Tracing the ways in which cycling suffered such a loss in popularity among adults is fundamental to understanding why the United States would be considered a "car" culture from the 1950s to today. As a lens for viewing American history, the story of the bicycle deepens our understanding of our national culture and the forces that influence it.