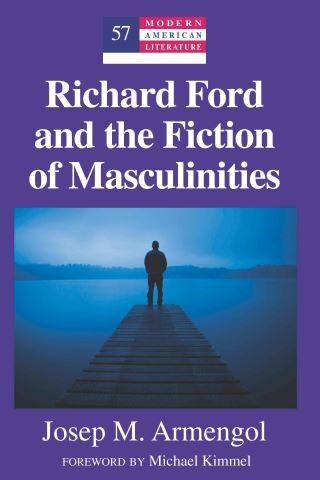 Richard Ford and the Fiction of Masculinities

Richard Ford and the Fiction of Masculinities demonstrates how contemporary U.S. novelist Richard Ford, winner of the Pulitzer Prize for literature, rewrites gender, and in particular masculinity, from highly subversive and innovative perspectives. Josep M. Armengol analyzes the construction, as well as the de-construction, of masculinity in all of Ford’s major fictional texts to date, ranging from A Piece of My Heart to The Sportswriter to The Lay of the Land. Given its simultaneous critique of traditional masculinity and its depiction of alternative models of being a man, Ford’s fiction is shown to be particularly interesting from a men’s studies perspective, which aims not only to undermine patriarchal masculinity but also to look for new, non-hierarchical, and more egalitarian models of being a man in contemporary U.S. culture and literature.
By framing Ford’s contemporary representations of masculinity within a more general context of American literature, this book reveals how his texts continue along a trajectory of earlier American fiction while they also re-examine masculinity in new, more complex ways. Richard Ford and the Fiction of Masculinities contributes to the much-needed revision of men and masculinities in U. S. literature, and especially Richard Ford’s fiction, where constructions of gender and masculinity remain, paradoxically enough, largely unexplored.