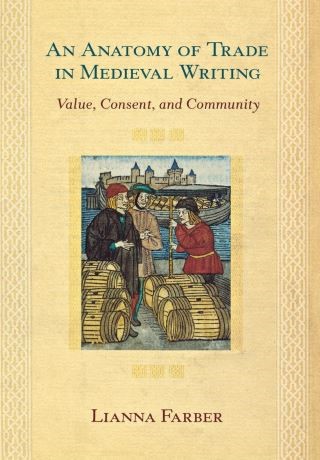 An Anatomy of Trade in Medieval Writing

Economics, in our modern sense of the term, was not a discipline in the Middle Ages, although the history of economic thought is often written as though it were. Lianna Farber restores the core economic concept of trade to its medieval contexts, showing that it contains three component parts: value, consent, and community. Medieval writing about trade not only relies on these elements, it presents them as unproblematic.

By addressing texts in which each element of trade is discussed directly, Farber demonstrates that this straightforward picture is falsely reassuring. In fact, these ideas were deeply contested. In the end, Farber reveals, writing about trade was not descriptive but argumentative, analyzing the act in an attempt to justify it. Such texts reveal deep intellectual uncertainties about the market society they advocated. An Anatomy of Trade in Medieval Writing benefits from Farber's close reading of literary sources, among them the poetry of Geoffrey Chaucer and Robert Henryson; theological sources, including the writing of Thomas Aquinas and Richard of Middleton; and legal sources such as the canon law on marriage formation. A provocative contribution to our understanding of medieval life and thought, this book implies a need to reconsider the genealogy of economics as a way of thinking about the world.