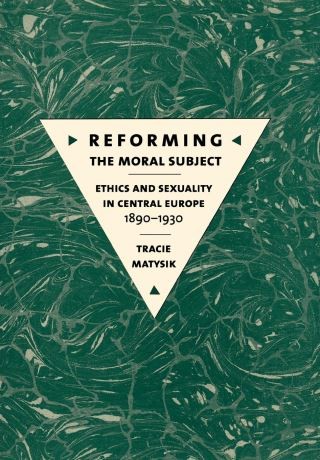 Reforming the Moral Subject explores a movement known as "ethics reform" that flourished in Central Europe between 1890 and 1930. Tracie Matysik examines the works of German-speaking intellectuals and activists-moral philosophers, sociologists, legal theorists, pedagogy specialists, psychoanalysts, sexual liberationists, and others-who discovered in the language of ethics a means to revitalize the public sphere. Ethics reformers used the academic field of moral philosophy to contest public- and state-sponsored rhetoric that they thought equated "morality" with national loyalty, religious tradition, and repressive sexual mores. They founded organizations and periodicals, circulated brochures, and hosted lectures and conferences, all aimed at rethinking ethics for a secular modernity.

Arising in a context sharply influenced by materialism, Darwinism, and the advent of sexology, ethics debates gradually focused not surprisingly on the role of sexuality in definitions of ethics and of the moral subject. Intellectuals and activists came to agree that sexuality was central to the formation of the moral subject. Some viewed the moral subject as that individual who had learned to suppress sexual drives, while others saw sexual drives and sexual autonomy as the source of moral energy and sentiment. The association of sexuality with a wide and variegated discussion of ethics made the sexualized moral subject an open concept that could not be fully regulated, confined, or conflated with national identities.

Matysik's compelling intellectual and cultural history of ethics and moral subjectivity reframes the nature of German liberalism and intellectual activism from the end of the nineteenth century until the interwar period.