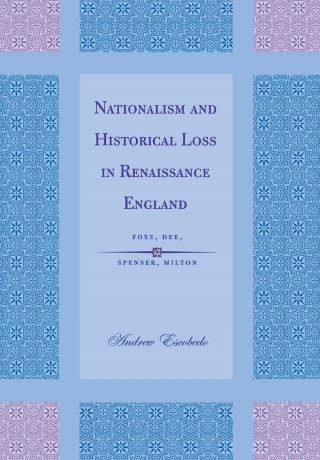 Andrew Escobedo here seeks to provide a new understanding of the emergence of national consciousness in England, showing that many Renaissance writers articulated their Englishness temporally, through an engagement with a history they perceived as lost or alienated. According to Escobedo, the English experienced nationalism as a form of community that disrupted earlier religious and social identities, making it difficult to link the national present to the medieval past. Furthermore, he argues, the English faced the nation's temporal isolation before the Enlightenment narrative of historical progress emerged as a means to interpret novelty in a positive light.

Escobedo examines how John Foxe, John Dee, Edmund Spenser, and John Milton used narrative representations of nationhood to mediate what they perceived as a troubling breach in history, attempting to bring together the English past, present, and near future in a complete and continuous story. Yet all four authors also register their concern that historical loss may be an inevitable feature of a "modern" England, and they come to see their narratives as long tapestries that spontaneously rip apart as they grow, obliging the weaver to return to repair them. Focusing on Renaissance England's perplexing sense of its time-boundedness, Escobedo presents early national consciousness as stranded awkwardly between the premodern and modern.