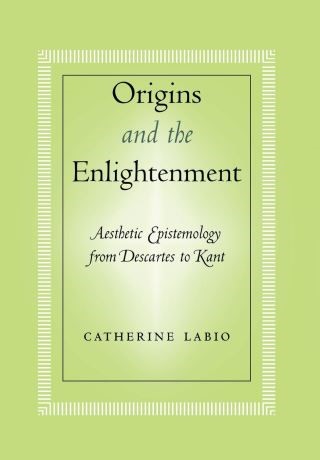 Origins and the Enlightenment

Aesthetic Epistemology from Descartes to Kant

What epistemic assumptions framed eighteenth-century thinkers' speculations regarding origins? What, if anything, connected these speculations? The best way to understand the Enlightenment's obsession with origins is to study it in conjunction with the contemporary conceptualization of originality as a criterion of aesthetic value, Catherine Labio maintains. Her expansive survey of the era's thought places special emphasis on epistemology and is genuinely interdisciplinary, drawing on such fields as anthropology, geometry, historiography, literary criticism, and political economy.

One of the most striking facets of Enlightenment thought, according to Labio, is the emergence of aesthetics as a master discourse that enabled its users to make sense of worlds ostensibly unrelated to the arts. In particular, once knowledge became defined as knowledge of things made by human beings, originality became valued not only for its novelty but also as a guarantee of epistemological certainty.

Labio analyzes the views held by a variety of European thinkers—including Baumgarten, Condillac, Descartes, Kant, Locke, Rousseau, Adam Smith, Vico, and Edward Young—on the origins of ideas, languages, nations, nature, and wealth. Throughout, the author deals with a wide range of primary and secondary materials.