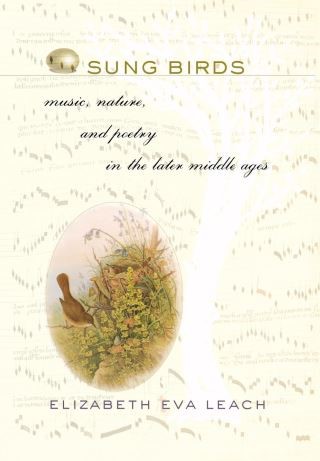 Music, Nature, and Poetry in the Later Middle Ages

Is birdsong music? The most frequent answer to this question in the Middle Ages was resoundingly "no." In Sung Birds, Elizabeth Eva Leach traces postmedieval uses of birdsong within Western musical culture. She first explains why such melodious sound was not music for medieval thinkers and then goes on to consider the ontology of music, the significance of comparisons between singers and birds, and the relationship between art and nature as enacted by the musical performance of late-medieval poetry. If birdsong was not music, how should we interpret the musical depiction of birdsong in human music-making? What does it tell us about the singers, their listeners, and the moral status of secular polyphony? Why was it the fourteenth century that saw the beginnings of this practice, continued to this day in the music of Messiaen and others?Leach explores medieval arguments about song, language, and rationality whose basic terms survive undiminished into the present. She considers not only lyrics that have their singers voice the songs or speech of birds but also those that represent other natural, nonmusical, sounds such as human cries or the barks of dogs. The dangerous sweetness of birdsong was invoked in discussions of musical ethics, which, because of the potential slippage between irrational beast and less rational woman in comparisons with rational human masculinity, depict women's singing as less than fully human. Leach's argument comes full circle with the advent of sound recording. This technological revolution-like its medieval equivalent, the invention of the music book-once again made the relationship between music and nature an acute preoccupation of Western culture.