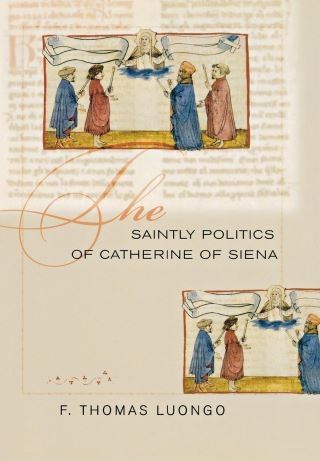 The Saintly Politics of Catherine of Siena

Saint Catherine of Siena (1347–1380) has become a defining figure in the history of medieval religion and one of the main exemplars of the "feminine turn" in late medieval religious culture. Despite a hagiographical tradition and historiography that has placed Catherine at a mystic remove from the politics of her day, Catherine's public authority was shaped by politics, both locally in Siena and broadly within late-fourteenth-century contests between the papacy and the Republic of Florence for hegemony in central Italy.

In The Saintly Politics of Catherine of Siena, F. Thomas Luongo combines literary-critical readings of Catherine's letters—she was the author of one of the largest collections of medieval letters—with political and social analysis. Drawing on a wide range of archival sources, Luongo investigates how Catherine's spiritual authority and sanctity were linked with contemporary political and cultural developments. He shows how the political situation of the church in Italy and a culture that privileged female spirituality and prophetic speech facilitated Catherine's emergence into a public role.

The Catherine who emerges from Luongo's well-written pages is a splendid example of what can result when a historian asks fresh questions about a familiar figure's life and brings new materials and methods to bear in formulating answers. The Saintly Politics of Catherine of Siena offers a woman more complex and interesting than the figure portrayed in most contemporary scholarship.