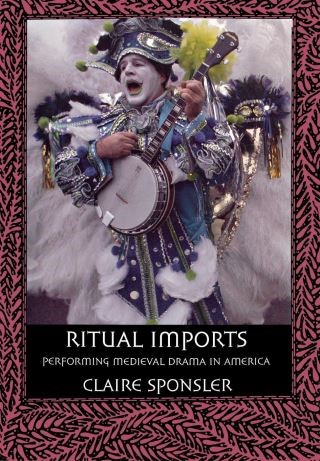 Throughout the Americas, performances deriving from medieval European rituals, ceremonies, and festivities made up a crucial part of the cultural cargo shipped from Europe to the overseas settlements. In 1583, Sir Humphrey Gilbert sailed from Plymouth, England, to Newfoundland, bringing with him "morris dancers, hobby horses, and Maylike Conceits" for the "allurement of the savages" and the "solace of our people." His voyage closely resembled that of twelve Franciscan friars who in 1524 had arrived in what is now Mexico armed with a repertoire of miracle plays, religious processions, and other performances. These two events, although far from unique, helped shape initial encounters between Europeans and indigenous peoples; they also marked the first stages of the process that would lead—by no means smoothly—to a distinctively American culture.

Ritual Imports is a groundbreaking cultural history of European performance traditions in the New World, from the sixteenth century to the present. Claire Sponsler examines the role of survivals and adaptations of medieval drama in shaping American culture from colonization through nation building and on to today's multicultural society. The book's subjects include New Mexican matachines dances and Spanish conquest drama, Albany's Pinkster festival and Afro-Dutch religious celebrations, Philadelphia's mummers and the Anglo-Saxon revival, a Brooklyn Italian American saint's play, American and German passion plays, and academic reconstructions of medieval drama. Drawing on theories of cultural appropriation, Ritual Imports makes an important contribution to medieval and American studies as well as to cultural studies and the history of theater.